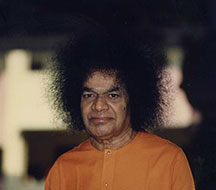 The Essence of Patanjali Yoga is Unity in Thought, Word and Deed

To some, the worldly appears to be good. For how long? It is only temporary. This is called happiness (santhosham). What is the meaning? Some...thosham – it's a fractional happiness or a gift. You feel hungry, you go to the canteen; you ate two chapatis; hunger is appeased but for how long? It is only for two hours. In the third hour, again you feel hungry. Therefore that which confers temporary happiness is called Sukham. But that which confers divine happiness (Daivanandam) is called Bliss (Anandam). Just enquire the difference between happiness and bliss. This bliss comes out of the heart; happiness comes out of the head. Head carries the responsibility; but heart has right. For every man, head and heart are important. Think good; you then reflect upon it. Then put it into action with hands what you thought. Therefore, the heart, head and hand together assume the '3H' form. In Patanjali Yoga it is said that we should exercise control over the senses and also achieve unity of the senses. Unity...unity...unity... That's why it is said – the proper study of mankind is man. What is this mankind? It's the harmony of three - heart, word and action. Therefore, out of this unity we will develop purity; through purity we will step into Divinity. The moment we step into Divinity, the enmity will be set away. Therefore the Patanjali Yoga sutra confers the Divinity. So, to the extent possible, the young students - boys and girls, in times of anger or difficulties, they should be able to tolerate and forbear, face it boldly and earn the patience to move forward. In the beginning stage, you may find it a bit difficult. As you practice, gradually it becomes a habit. Walking, talking, reading, writing, eating... everything comes out of practice. Everything is accomplished only by practice which brought us to this level. Do just-born babies start run immediately? No. First the child gets up, crawls, stands up, falls, again gets up and eventually starts walking. Therefore, we have to develop such practices gradually. Therefore, this yoga is not meant only for rishis, yogis and renunciants but it is essential for every human being with the body.