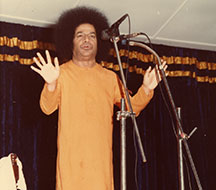 Initially, Paul was a fierce critic of Jesus. Jesus appeared in a dream to Paul, and smiled. He patted his back and said, "Paul, What harm did I do you? What difficulties have I put you through? Then, why do you hate me? All your sufferings, all your losses, all your difficulties, are not given by me. They are the consequences of your own actions. You are only passing through the reaction of your actions. I have not given you any suffering." When Jesus blessed him so, the mind of Paul changed. Later he became a servant of God and he composed a text, and came to be known as "St. Paul". In this way, Jesus corrected wicked people, cruel people, bad people, and reformed them. It is only the body that is put to suffering. We have to worship Jesus keeping these ideals in mind, and not otherwise.