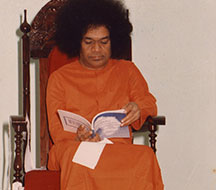 The great saint Ramakrishna Paramahamsa used to live in an ashram in a village named Kamarakpur in Bengal and located on the banks of the river Ganges. Unlike their counterparts elsewhere, Brahmins in Bengal eat fresh-water fish and are thus known as Matsya Brahmins or fish-eating Brahmins. Whenever they went to the river for bathing, they would bring some fish back home. For going from Kamarakpur to the city of Calcutta [annotate in text version], one had to cross the Ganges by boat. Often while Ramakrishna made such trips, he would gather all the children in the boat and tell them stories that promoted devotion and spiritual values. Thanks to the influence of the Kali age, both young and old made fun of Satsang and good company. Thus the youth and the parents of children in the boat did not like what Ramakrishna was doing and raised questions like: “Why is devotion needed at this early age? Worship of God and chanting Divine names like Rama, Krishna and Govinda can wait till retirement.” Back then, many youth were drawn to Ramakrishna and everyday he would assign one of them to get fish from Calcutta. One day, it was the turn of Brahmananda. Seeing the orange-robe clad Brahmananda get into the boat and recognising him to be one of Ramakrishna’s disciples, the people managing the boat immediately began making very critical remarks about Ramakrishna saying, “That mad man does not do any work nor do his boys, like this one.” In their view, Ramakrishna was collecting talented youth and ruining them. Back then, it was common to regard Ramakrishna as a mad person. When Brahmananda heard his master being vilified, he was deeply upset. However, being a soft person he did not raise his voice in protest. Instead, deeply troubled and full of anguish, Brahmananda returned to the ashram with fish. Seeing Brahmananda Ramakrishna asked, “What happened and why are you in tears?” Brahmananda replied, “Master, I just could not bear to hear the way people on the boat talked about you. I do not care if people say bad things about me; but when they abuse you, I feel deeply hurt!” Hearing this Ramakrishna became angry and said, “Can you call yourself a disciple after putting up with abuses hurled at your master? You are unfit to be here in the ashram. Leave this place at once! You are not a good disciple. How could you remain silent when your Master was being vilified? How could you put up with all that abuse? Is it not a sin to tolerate the abuses directed at one’s master? The one who abuses a Guru commits a sin as also a disciple who puts up with it.” Brahmananda did not respond but just went on crying. Next day, it was the turn of young Narendra, also known as Vivekananda, to do the boat trip. And as earlier, people on the boat began mocking him as he approached. Even as Vivekananda purchased a ticket and boarded the boat, the boatmen began to mock him. Infuriated, Vivekananda shouted, “Shut up!” This only served to encourage the offenders to become more aggressive. Vivekananda then resorted to force and picking up one man warned that if the abuse did not stop he would begin throwing them into the river. That frightened the mob and everyone promptly became silent. Vivekananda was thus able to make the trip, buy fish and complete his assignment. When Vivekananda returned, Ramakrishna asked him, “What happened today?” Vivekananda replied, “Whatever happened when Brahmananda went happened again.” “How did you respond?” Ramakrishna then asked. Vivekananda answered, “Will I remain silent if my Guru is vilified? I thrashed them and even threatened to throw them into the river!” Hearing this Ramakrishna reprimanded Vivekananda and said, “You are wearing ochre robe and live here in the Ashram. And yet, you seem to have no forbearance. When you have no control over yourself, what purpose is there in your staying in the Ashram? Deeply perplexed, Narendra who had earlier been a member of the Brahmo Samaj asked, “Master, yesterday you gave Brahmananda some advice but today you are telling me exactly the opposite! Which of these two is the correct advice? The one you gave yesterday or what you are telling me now?” Ramakrishna then said, “O foolish young man, when there is excess air in the tyre that excess has to be let out; likewise, when air is lacking, the tyre must be filled to the required extent!” Teaching and preaching must always be tailored to the situation and the circumstances and cannot be the same for all. They must be tuned to the nature of the person receiving the teaching and the capacity of the person to absorb the teachings. There is plenty of water in the Ganges. However, what each person carries home depends on the size of the container he brings. In the same way, teaching must be tailored to the recipient; all cannot be taught the same lesson. Where spiritual seekers are concerned, God bestows energy according to their capacity to absorb, which in turn is determined by how disciplined they are. It is through discipline that you can enhance your capacity to absorb. Without discipline, it is not possible to attain God. Lack of steadiness would not do!