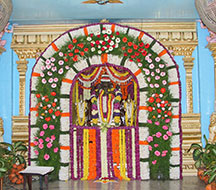 God will be your servant if you have devotion for Him: Analogy of Hanuman

The one with complete faith in the Lord will pray whole heartedly and the Lord will respond by granting the boons. Without faith how can one demand the Lord? God is not one’s servant! But if one has the true devotion then the Lord is verily the servant of His devotees!! So God is servant of all. A small example to illustrate this: Servant stands in waiting at the threshold of the Lord’s shrine; similarly the Lord too stands alert and in waiting, like a servant, for His devotees to hear their pleas and to grant their wishes!! God becomes a master if one is not devoted or if one does not foster any divine feelings. People here know the story of Hanuman. Hanuman is virtuous and strong. In the presence of Lord Rama Hanuman stood humbly and in front of Ravana he stood in all his valour. What is the reason? In front of an egoistic person the devotee stood like a warrior. And he stood humbly in presence of the Lord who is the embodiment of love. Hence life must be carried on based on the circumstances. Therefore God always submits Himself to His devotees. The Lord is extolled as ‘bhakta paradheenaya namaha!’ meaning that the Lord is always submissive to those who are devoted. God is always devoted to His devotees when one has pure and sacred devotion.