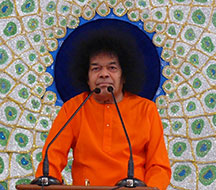 What is the meaning of word Guru

What is the inner significance of the word “guru”? ““Gu”, “Ru”= “Gu”- gukaro andhakarasya, “ru”- rukaaro tannivaranaha”. ‘Guru’ is the one who dispels the darkness of ignorance. There is another connotation to the word ‘guru’: “Gu” –“gunaateethaha”, beyond the attributes; “ru”- “rooparahithaha”, formless. Brahma is the only one who is attribute-less and formless. So Brahma is the guru. Therefore the avatars did not teach anybody or give ‘Upadesh’ to anyone. Why does one require ‘Upadesha’ when one is in ‘swadesha’, in one’s own place? One is in Brahman, in Atma then why does one require ‘Upadesha’, teaching? It is those people who do not realise this truth that teach. There is a guru for the person who is teaching others. Therefore ‘guru’ is the person who does not have a ‘guru’ and that is God. It is therefore said, “Guru Brahma, gurur Vishnu, gururdevo Maheshwara, Gurur sakshaath parabrahma, Tasmai sri gurave namaha!” But in this modern day it is taught that Guru is Brahma, guru is Vishnu, and guru is Eshwara. But no, it is not true. These gurus are not Brahma, Vishnu or Maheshwara. So who is ‘guru’? Brahma is guru, Maheshwara is guru and Vishnu is guru; they represent the three attributes. Brahma represents the ‘Mantra’, the emotion. The pious ‘Sathwic’ nature is represented by Vishnu. Eshwara represents the ‘tamas’ the darkness. Therefore the whole world is made up of these three attributes. Every man has the three attributes. No one has seen the Brahma or Vishnu or Maheshwara. But they reside in every heart in the form of the three attributes. Leaving such an easy path and by following the unnecessary path, man wastes his precious life by getting carried away by the illusions and doubts. Then who is one’s guru? One is one’s own guru!! “Marmamerigina marunimisham lo manase vaadiki gurudandi”- the mind becomes one’s teacher the moment one knows the secret of life!! There is no guru beyond the mind!! The gurus today, confer some ‘Mantra’, teaching, to the disciple and get worshipped by them in return. Swami is not criticising anybody but is just stating the facts. The gurus whisper the Mantra in the ear and stretch hands to collect money. It is not an act befitting a guru. What is the meaning of ‘Gurudakshina’, offering to guru? Knowing thyself as guru is the true ‘Gurudakshina’!! Hence one is one’s own guru. One is verily the brahma and ‘Shakthi’ energy. Everything is found in oneself.