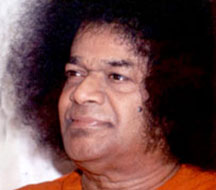 These western people, because of the frustrations and depressions they feel due to the materialistic way of life, are propagating this type of meditation which free them of body consciousness, but according to Indian tradition this cannot be called ‘Dhyana’, but some people describe ‘Dhyana’ as concentration. ‘Concentration’ means, now I am holding a paper in my hand. I am reading what is there on that paper. There I find the words, 'District sevadal conference'. In order to read what is printed on the paper my eyes must be focused on the letters. I must hold the paper in my hand and I must think with my mind. Intellect must enquire. Intellect, mind, hands and the eyes- they must all work in conjunction, only then it is possible to concentrate. So only with the co-ordination of all the senses it is possible for us to read. Therefore concentration is necessary for reading. Concentration is also required for writing. Another type of concentration is necessary for walking. It is not possible for us to eat if we do not have the concentration to discriminate whether the item is appadam or a sweet or a bajji etc. To drive a motor car, concentration is essential. This concentration is below senses, becomes a routine, a habit in daily life. In order to get this concentration it is not necessary to undertake 'Dhyana', meditation. Therefore concentration cannot be equated to Dhyana. ‘Concentration’ is below senses. ‘Meditation’ is beyond senses. We must undertake the journey from below the senses to beyond the senses. So when we set out from what is below sense, through concentration, we reach the stage of ‘contemplation’ and when we cross the limits of ‘contemplation’ we reach the area of ‘meditation’. So there are three stages—‘concentration’, ‘contemplation’ and ‘meditation’. ‘Concentration’ may be equated to 'The one you think you are', ‘Contemplation’ is 'the one, others think you are', ‘Meditation’ enables us to recognise 'the one, you really are'. Therefore, you are not one person. So we must carry on our journey on these three planes. With the body we must cultivate control of the senses, with the mind we must undertake the growth of the soul and with the soul we must experience the ‘Bliss’.