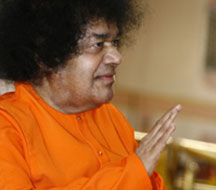 Shirdi Baba gives the explanation of who is a true Guru: Kelkar Experience

One day Baba called Kelkar and asked him to do “Guru Pooja”, (worship Guru) as it was a Gurupoornima, a day dedicated to the worship of gurus. None of them knew about Guru Pooja. Baba started the tradition of worship of Gurus through Kelkar who was the maternal uncle of Sathe. Kelkar asked, “What is meant by guru Pooja?” Baba said, “Who do you think is a guru? The head of the spiritual organisation is not a guru nor is a sanyasi (a recluse). God alone is Guru. The bliss of Brahma, the “Brahmanandam”, is the highest form of all the happiness that is available in this world. No other person is eligible to have it. “Paramasukhadam”-The worldly pleasures are impermanent. Guru is the paramatma, the Supreme Being, Himself. “Kevalam gnyanamurthim”- He is the very embodiment of knowledge and wisdom. It is not the knowledge of world. The real knowledge is that of adwaitha, non-dualism. The realisation that there is no ‘other’ that pervades this cosmos is the ultimate knowledge. God alone is the embodiment of such knowledge. “Dwandwateetam”- that which is beyond the dualism. It is the ‘tatwa gnyanam’ which pertains to the realisation that one is God, “Aham brahmasmi” which is a statement in Vedas. “Aham brahmasmi” “pragnyanam Brahma”, “Ayamatma Brahma”, “Twamewaham” are the four statements in the Vedas. The principle that is beyond these four statements is the knowledge of Brahman. Brahmanandam, paramasukhadam, Kevalam gnyanamurthim dwandwateetam,” Explaining in this way Baba said, “God alone is the teacher, Guru. Guru is the Creator, the protector and the destroyer. The embodiment of the Brahma (the creator), Vishnu, (the one who sustains) and Maheshwara, (the destroyer) is the Guru in true sense. It implies that God alone is the true teacher.” Kelkar asked Baba, “Please give me directions as to whether I should worship Brahma or Vishnu or Rudra?” Pretending anger, Baba replied, “You Satan, I am here, worship me.” By saying so Baba indicated that He is the embodiment of Brahma, Vishnu and Shiva. “Twamewaham- I am I. I, who am the very embodiment of such principle, am here so worship Me.” said Baba. All the people who gathered and heard this believed that Shirdi Sai Baba is the very form of Parameshwara, the Supreme Being.