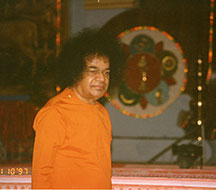 Permanent address of God is your heart

One must never think that God is present only in pilgrim centres or in holy shrines. God is everywhere but His permanent address is one’s heart. Sage Narada asked Lord Narayana once,” Swamy, I am on the move in all the three phases of time and observe the good and the bad happening in the world. Once in a while I feel like reporting those to you but, I know not your whereabouts. Some say you dwell in Kailasa, some say its Vaikuntha, some say you dwell in heaven—I do not know where they are.” Then the Lord answered thus: “‘madbhaktaha, yatra gayanti, tatra tishtaami Narada!!’ Narada! Vaikuntha, Kailasa and heaven are like the branch offices, heart is my permanent address. I dwell in those places where devotees chant my name. ‘.....tatra tishtaami Narada!’I do not live there, I install myself there.” Devotees search for God elsewhere, when He is in one’s heart!! However, the chanting or the bhajan singing is not being done with pure and selfless heart. God manifests where one thinks of Him with pure and sacred heart.