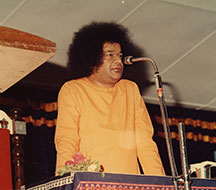 Embodiments of divine love! We should not consider Atmic principle only limited to bodies. Only when a flower blossoms, you get its perfume from that. The flower must be quite all right. Only when a right type of flower blossoms, you get beauty and joy. If it does not have strength and stamina in it cannot be beautiful. The perfume also will not be complete. What do you mean by keeping this flower in good health? You must fill your heart with virtues. Then only you will be able to attract the entire world. If you keep all your concentration only on the physical body, the joy that you get is only temporary. It was Radha who was attracted by the qualities of Krishna, who enjoyed the qualities of Krishna, who offered herself to Him. Chandrakala, who was the sister of Radha, only just saw the form of Krishna and enjoyed the form. Chandra based all her enjoyment on the form. Radha based all her joy on the qualities of Krishna. Radha enjoyed the joy and the delight of life based on the qualities of Krishna. She always reflected upon the qualities of Krishna. That is why this Earth has got the name Dhara and which is Radha. This Radha always spent her time in the worship of Krishna. All of you know the spelling of the word Radha, RADA. If you start this with the letter R, it becomes Radha. If you start this from A, it becomes adhar. If you start from D, it becomes dhar. If you start from the last A, it becomes adhar. That means to say that for Radha the entire basis is continuous worship. Whoever offers continuous worship of Krishna is Radha. Krishna is one, who through Bhagavatha, expounded and made Gopikas and Gopalas to experience the divinity in His love. All the leelas of Krishna are difficult to fathom, it is difficult to comprehend them, it is difficult to even to describe them. But people filled with meanness, have wrongly understood the relationship that existed between Krishna and Gopikas and they have interpreted wrongly. What is the ultimate meaning of all these? Brindavan is the heart. All our feelings to be compared to Gopikas. Atma may be compared to Krishna. This joy and delight, this is leela. That is the true Brindavan of the heart. Transform every man's heart into Brindavan. Consider your Atmaswarupa itself as Krishna. Every act you perform must be transformed into the leelas of Krishna. Today is Gokulashtami. We are celebrating that as birthday of Krishna. We are preparing a number of delicious foods of which paramanna is one. Paramanna refers to the supreme food. The actual paramanna is not the one prepared with various ingredients like rice, sugar and so on. As this food relates to the transcendental world and supreme world, it is totally delightful, and that is why it is called paramanna - it is very sweet. It is the name of Krishna which is really supremely delicious. God's name is really sweet. His word is sweet. His eyes are sweet. Everything is sweet about the master of Madhura, the Lord of Madhura.