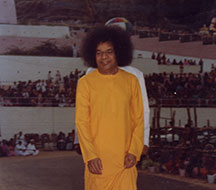 With courage, conviction and faith say, I have God in my heart

Some may make fun of you. The atheists may argue, “Being well educated and a metropolitan bred you are entertaining bhajans etc like village people. This is not a sign of modernism. Do not think of God.” Then what should one think about, the Demon? No. One should think of God and have strong faith. “Sir, to whom are you sermonising, me? Whom are you denying? You are saying that God does not exist. You may not have a God, but I have my God. Who are you to refute my God? You are welcome to deny your God. I have my God and it is Him that I am thinking of.” When you retaliate thus, with full conviction and courage, your vigour and vitality are bound to improve. You need not listen to others or follow them, when they deny God. If anyone says that you do not have mother, you should not cry. The person saying so is a fool. You should tell them, “I have mother and she is at home.” Likewise, you must be able say with courage and conviction that you have God and He resides in your heart! You should make others follow you but not vice versa. If you follow others you become a slave. Others should become your slaves because you are with God. If you are with God, the whole world will follow you. Hence you must develop such faith, courage and conviction and should not cry over others words.