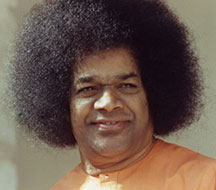 Make others happy and you will be happy

All religions and all castes are creations of man. As such, we are contributing to the divisions and differences in villages and in towns. There are two parts in a village, one which belongs to the rich and the other which belongs to the poor. In a town, we have the old town and the new town. These differences are created by us. While doing so, we forget that the primary objective of everyone is happiness. Happiness, truth and sacrifice constitute the wealth in the treasury of God. You can be happy only when you understand the relationship that should exist between man and man. If we ask ourselves what the meaning of happiness is, we get the answer that absence of sorrow is happiness. Therefore, we have to think about the process of getting rid of sorrow. Between one star and another and between one planet and another, there is light that shines in the space. In the same manner, between one period of sorrow and another, there should be happiness shining so far as man is concerned. Before man can enjoy such happiness, we should make an enquiry and realise the inner meaning of some words that we use. In all that man does with a view to love himself, it is not possible for him to ignore loving others. Without cultivating love for others, you can never cultivate love for yourself. Sorrow for yourself is gained by hurting others. In the same manner, victory in every war will result in another war. So also, any happiness that you can give to others will result in happiness for yourself in the end. Man must realise that he cannot get anything without sharing it with humanity around him. So, you must believe that, in due course, happiness of the people around you will lead to your own happiness.