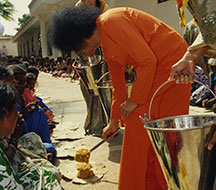 We need to understand the nature of Jagath

Transforming one’s love filled heart into one with filled with spirit of sacrifice; one must attain unity with the divine. “vadalavalasina daanini vadalinantha, Teliyavalasinadaanini telisinantha, Cheravalasinadaanini cherinantha, Kalugu aanandaminthani cheppataguna!!” ‘Giving up what has to be given up, Knowing the knowable, Reaching the reachable, Is the bliss then attained fathomable?!!” One must give up the worldly thoughts, know the essence of life, and reach the divine; such a person is truly immortal. This is said in the verses, ”Asatoma sadgamaya, Tamasoma Jyothirgamaya, mruthyorma amrutham gamaya” meaning “lead me from untruth to truth, from darkness to light and from mortality to immortality. One would have no worry if one fully comprehends the nature of the world. There is nothing which is permanent in the world, all comes and goes like the pictures in a motion picture. All is passing clouds in the world. One thinks a happening to be true but soon the happening fades away. One thinks the coming as truth and going as false. This repetition of coming and going, truth and untruth leads delusion or ‘Mithya’. “Mithya” refers to that which is not constant. When one understands this aspect one can understand the world.