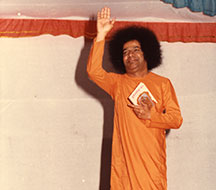 A small example. At one time Rama, Lakshmana and Bharata were playing with a ball. After playing for a long time, tired and sweaty, Rama returned and sat on the lap of Kousalya. Rama appeared to be ecstatic. His mother asked, 'Rama you are so happy even though you are tired. What is the reason?' He said, 'Mother, I was playing ball with my brothers. Today Bharata won and I am very happy'. "You are so happy because your younger brother won - there should be more brothers like you." After some time Bharata came running. He appeared very sad. Kausalya asked, "You won the game. Then why are you sad?" He said, "Brother lost and made me win the game. For my sake, my elder brother lost the game." Isn't this strange? Brothers should be like that. The elder brother should see that the younger brother wins the game. These are the ideals taught in Ramayana. Today, brothers are not like that. Rama and Lakshmana - in those times they were in supreme state. But today, brothers go to the supreme court. You should go to the supreme state. Brothers should be united, they should be integrated, they should be adjusting and understanding. Today there is no adjustment and understanding. So many ideals are shown in the ancient Ramayana. Elder brother was happy that the younger brother had won and the younger brother was sad because the elder brother had lost. That sort of love should be developed today. Students, develop this love.