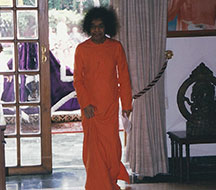 Human life is precious, realize it

Divya Atmaswarupas! We are all born in this world taking this human form. But this human body with the five elements is not permanent. Once this body drops down or disappears, it’s not possible to find it in any other place. Whether it is the property which we own, or the bodily pleasures which we have, these are all temporary, they are like passing clouds. After you have passed away, whether in the past, present or the future, at all times, what remains is the immortal aspect in you, the reputation that you have earned. When you die, you will be remembered for the good that you have done. Your name will be mentioned in honour and thinking about the good that you have contributed. If you have done something bad, the later generations will only be remember the bad that you have done and that will also reflect on your family in a negative manner. I am hoping that because God gifted this sacred human life expecting you to do some work worthy of mentioning and thereby make your life purposeful and useful. A little while ago, a small girl told us that this body is like temple of God, and in the body resides God. The very heart inside the body is the seat where God resides. We will have to therefore recognize that all the organs in this body are sacred. They cannot be abused, the five senses, your sight, your hearing, your smell, your touch and taste, all should be kept in a good condition. They should not be allowed to deteriorate. Remember the saying 'Janthunaam nara janma dhurlabam', which means “of all the births of various kinds of animals, to be born as human being is something which is very difficult”. Having achieved this human life, you must spend all the time that you have at your disposal by speaking truth, thinking of good things, keeping good company, having good thoughts, and doing good things. If you don’t, you have wasted precious time given to you and time wasted is life wasted.