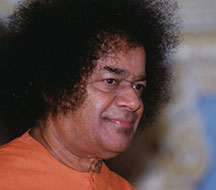 God is in you; Thyagaraja Pining

God is within me, He is with me, above me, below me, everywhere around me. He is everywhere. How can I search for such God who is everywhere? Thyagaraja also said, "Where shall I search, Rama? Where shall I search? Where can I search for you? I can't bear this kind of separation, I cannot live without you, where shall I search for you?" So saying, he decided to drown himself in the river. As he proceeded towards the river, his foot struck something. When he lifted it up, he saw that it was the idol of Rama. When he was in search of Rama, the divine, Rama caught hold of him by the foot! Then he picked up the idol (and said), "Rama you are so great. You are with me, in me, around me. I did not know this and spent all my time in utter ignorance. Oh Lord! come with me to my residence, Oh Lord! Come home, Oh Lord! I offer my salutations to the majestic Lord Rama. I could find you here, now come home along with me." This is the feeling of oneness, total identity with the divinity. The one with such divine experiences, an ardent devotee alone will understand. The one suffering from malaria will find even sugar bitter. He thinks the sugar is bitter, but doesn't understand that the defect lies with his tongue, as he is a malaria patient. It is the poison on the tongue which makes the sugar taste bitter, it is not the fault of the sugar. So, make sure that you stay away from this poison and experience the sweetness of sugar. God is within us. He is in me, with me, around me, behind me. When you think in this manner, you become divine. Never think that you are separate from God.