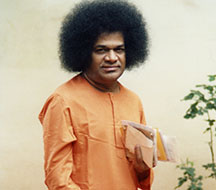 Some of the Christians show this sign (gesturing the sign of the cross). This indicates these four - the head, heart and the hands. We have to take these three as the basis - the head, heart and the hand. Install God in your heart, think of God by your head, work with your hands, that is the meaning of these indications. So, in the cross, the three - the head, heart and hands (are indicated). Some think it only indicates the cross. That is not the true inner meaning of the cross. The head, the heart and the hands, let all these three grow along the sacred path. Whatever you may undertake, take it as God's work. Whatever thought may be entertained, let it be divine. Let any work be done, take it as God's work. This is what is meant when they do like that (making the sign of the cross). Some don't understand the meaning - they waste their hands, misuse their heads, and pollute their hearts. Heart is the altar of God, and head is the reflection of the divine. It is all reaction, reflection and resound of God in our heart. With these feelings we have to pass on and share this message of God in society.