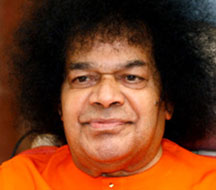 Many went to Ramakrishna and asked him. Vivekananda also was there. They asked him, 'Swami have you seen God?' Yes I have seen he replied. Where have you seen him? Just as you see me or I see You I saw God in the same way. Yes, I have seen God. Then why cant you show him to me? You too can see God. Why is it that I cannot see him? Oh mad cap, you see God but still you say that you haven't seen him. There cannot be greater fool than you. You see the world using the worldly vision. I see the world with a divine feeling. Feeling is very important. But one thing here. The man in the world cries for children, cry for wife, for money, for food, but we can't find anyone crying for God. When you cry for God, you can see him. If you cry for the world then how do you expect to see God? How is it possible? It is impossible. The thing which you pine for you will get that. Pine for God. That was the teaching of Ramakrishna to Vivekananda. Child, you are crying for so many things. You should shed tears for God and not for the worldly things. Cry for God and he is sure to manifest himself to you. Everything is within the mind not outside. So, when you want to see and experience God, dedicate yourself to God.