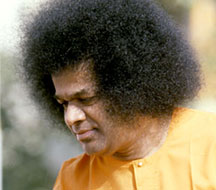 Shankaracharya had five disciples. One is very pure hearted. The others came there to learn Shastras and Upanishads and other knowledge. They were going through logic and grammar. One day Shankaracharya was teaching this logic. One student wanted to attend to the personal duties of the teacher. He would collect all the clothes of the guru and take it to the river when he would go to bathe. This disciple got completely involved in these duties in attending the personal needs of the guru. Thinking, chanting and and repeating the name of the Guru, he started washing the clothes and he finds that the water of the Ganges was rising. The water reached his neck when he noticed this. He was not fear stricken because he would drown, he thought he may not be able to survive. "By evening time it may not be possible for me to handover the clothes to my Guru" that was his main thought. " I should handover these clothes to the Guru. It doesn't matter even if I lose my life". He kept the bundle of clothes on his head and started chanting the name of his Guru. Wherever he kept his foot to step ahead, there arose a lotus flower from the stone. The student was named Padmapada. The guru summoned him and blessed him. "Service to Guru is greatest. You considered Guru as your God. God is not separate from your Guru. Guru is Brahma, Guru is Vishnu, Guru is Shiva. Do not get carried away by today's interpretation of Guru. God is only Guru. The creation, sustenance and annihilation are divine qualities. Consider God as your Guru. Don't take individuals as your Guru". Thus, he blessed Padmapada. The other four disciples used to make fun of Padmapada. At a moment of time he could chant all his lessons learnt. In fact, he was much better than all those who had studied everyday. Shankaracharya asked, "How are you chanting all these things?" He said Guru, "You are my everything, I surrender myself to you". Who is Shankara? The one without doubts (Shanka) is Shankara. Shankara has no doubts. I surrendered to such a person.