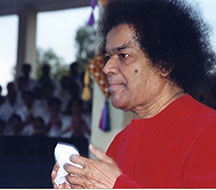 Organisational structure has been changed for greater good

One more thing: previously there was the ‘world council’; since there were only a few people, it was possible to work through the world council. Sai work has grown enormously in other countries more than that in Bharath. It is not possible for one individual to look after all this. So, there will a president for entire Bharath and each president for each country to look after the affairs in the particular country. The world council ceases to exist from today. The organisational structure and the method of functioning in other countries will the same as that in Bharath. The different structures will function according to the norms, situations and the climate prevalent in those countries. But the unbridled freedom of individual structures will lead to chaos. The work and the proceedings must be conveyed to the organisation in Bharath. The organisations in foreign countries can adopt the policies and procedures followed in Bharath suitable to their countries. The offices in other countries must send a report on the proceedings to Prashanthi Nilayam which is the head quarters. These changes have been introduced to help progress the work of Satya Sai organisations all over the world. There is no other motive behind the changes. Misunderstanding the changes and talking ill about it amounts to waste of time and will also harm the organisation. All are one and all must be like the brethren of divine. There is no difference. Ill feelings and bad thought might arise from time to time as it is human nature. Those thoughts must be corrected and removed but should not be fostered. Past is past. One has walked the path being aware of it. One has to look ahead. Swami expects all the members to consider each one as their brothers and sisters, work harmoniously and be ready to set an ideal. Swami is in no way related to the organisation. Members must look after it themselves. Part taking the bliss that the members enjoy is Swami’s work. There will always be one to one connection between Swami and the devotees. It will be even merrier if that connection develops at organisation level too.