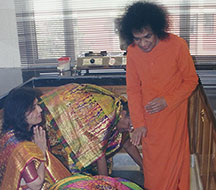 Swami on the Sacred texts of India

When one wants to fell a tree or destroy a tree, he can do so only by cutting the roots. By working on the leaves and the branches, how are you going to bring down a tree. From vedic times in understanding the basic truth, the rishis have learnt the knowledge of the atma.This secret has been recognized even by those who live in foreign countries as well and they have been praising Bharat's tradition and culture and they realized that the Atmic knowledge is the one which gives worldly as well as spiritual happiness. Such sacred learning is really what can be called learning, has been recognized world over and this learning has been shining like a Jyoti world over, yet citizens of bharath have been living under the shadow of this Jyothi and not learning the brightness of the Jyothi in itself. Our ancestors, parents have all been learning from these sacred texts, which give the culture of Bharath and they have been enjoying in many ways peace of mind. They have taken Bharatha, Bhagavata, Ramayana, Bhagavad Gita to their hearts. They have learnt the essence of these texts and they have been putting it at a high pedestal and have been performing pooja and enjoying these great texts. They have filled their minds with the contents of these texts and in their daily life, they have been practicing what the texts have been teaching them and have been serving the society in that way. Unfortunately, with the advent of the modern age and civilization, people of today have lost faith in these things and they think that, to believe in these things is a mark of lack of civilization and neglect the contents of these texts. In this manner the texts and the scriptures that have been discarded by the citizens of the Bharat have been taken up by the Westerners and by an effort they have understood the secrets that are contained in these texts and they have regarded them as a gift of this great land to them and they have been regarding the citizens of this country as great people who have produced those texts. People of Germany, who have accepted the contents of the 'Atharvana Veda' have recognized that in those texts, secrets of education and principles of modern medicine are present . They have been giving them back to us as a very great basis of modern medicine. It has been said that, instead of accepting the food that is prepared well in ones home, one goes after stale food from another home. So also, the citizens of Bharath instead of accepting what belonged to them in the beginning, are now accepting something which is coming from an outside country, as if it is something greater than what they have in their own country.