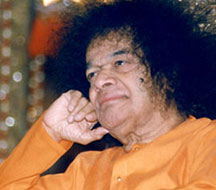 He began preaching and establishing the fact that it is the one atma that pervades all beings, God is one but due to the different forms one sees the diversity; the all pervading divinity is one and only one without a second. With time it was felt that it was difficult for ordinary humans to follow and comprehend the sacred concepts of adwaitha namely oneness of God. Therefore Ramanujacharya took upon himself to advocate an alternative path. Ramanuja was the beloved son of Kanthimati and Surakesa. He preached that bhakthi or devotion is the path to divinity and postulated that the divine God is the worshipped one and the devotees or the seekers are the worshippers. In this was he introduced a special and qualified dualism in understanding of the divinity. The qualified dualism that he preached stated that the destination for all beings is the same. He compared the seeker to a river and God to a ocean. The river flows into the ocean and merges with it losing its identity; likewise following the path of devotion one realises that the worshipped and the worshipper are one and the same and ultimately merge into each other. This was the philosophy propounded by Ramanujacharya. When one studies this principle in depth, one realises that this is alike to the Adwaitha philosophy. When one ponders over the origin of river, one can decipher that the river originates from the rain, and the rain in turn from the clouds and the clouds from the ocean. So in a nut shell, rivers, the worshippers, are formed from the ocean, the worshipped, and are returning back to the ocean. This philosophy was called as ‘Visishtadwaitha’. It is only when the river has the loving desire to reach the ocean, its ultimate destination, then alone can it merge with the ocean. This love is known by the sacred name of ‘bhakthi’ or devotion. Pure, unwavering and unsullied love is called as bhakthi. The kind of love which does not desire anything other than God is bhakthi. The urge which makes one want for oneself is ‘love’, it is not for the want of materialistic and worldly things but for oneself who is essentially the divine. Loving the divine as one loves one’s reflection in the mirror is called as bhakthi. Ramanujacharya gave importance to bhakthi and propagated this philosophy of ‘Visishtadwaitha’.