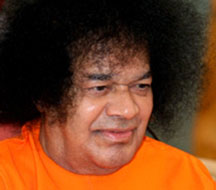 You all know this. Sathyabhama, wanted to possess Krishna, keep him all to herself. Sathyabhama has a gem called the Shamantaka which could increase her gold possession and she could have gold to any extent possible and so she thought that she can balance, she can weigh lord and buy him. When she wanted to buy Krishna in spite of all gold, she could not balance him. In fact, she has put all gold. You cannot buy God with either gold or money. You can buy him with your "Guna"- the quality. Then Sathyabhama ran to Rukmini. She was worshippping Tulasi. She collected tulasi leaves and followed Sathyabhama. All this story is narrated by Narada. Rukmini said, Sister, it is not good for you to proceed in this wrong path. You cannot buy god with money and in fact you can have him with your character and devotion. Sathyabhama then requested Rukmini to help her. Rukmini said, 'Sathya, in fact the name and form would make perfect balance. She said, "Krishna, for your form your name equals". There is Narada in between and he said, 'I am offering Krishna in his form. I want something that has a form because he is under my control now. If you give me something with form then I can offer Krishna here and she had nothing else. She has only tulasi leaf. She kept it on the balance. If it is true that you submit yourself to your devotee who offers either a leaf, a flower, fruit or water with with devotion, you will certainly balance equal to this tulasi leaf and one tulasi leaf was kept there, Krishna outweighed because she offered with love. What is a leaf? Human body is the leaf, a flower ,human heart, water, tears of joy. Fruit, what is the fruit? The fruit of the mind. There lies the difference between Sathyabhama-the one of desire and Rukmini the one with devotion. Since that time even Satyabhama started worshiping god with love.